SICILY, MAY 21, 1972 ... There we were, idling away a warm springtime day in the ancient Mediterranean town of Collesano, when we heard the 20th Century coming down on us. Something was plunging from the craggy mountains above, something wild, its untamed cry reverberating between the timeworn buildings. The wise among us took cover in doorways. I raised my Nikon. Around the corner, a flash of scarlet. The Ferrari. I framed and fired. And the moment was gone.

For me this picture brings it all back, and it also seems to speak to many who were never there but wish they had been. Visitors in our vendor booth at Monterey often pick it up to show their friends, and they talk about it with animation and shining faces.

A blood-red racing car screaming across the open landscapes of Olde Europe. The mad delirium that sparked our passion.

This was the crazy-wonderful old Targa Florio, one of the world's most venerable road races, and among the most endangered. It had been going for 66 years when I was there in 1972, but that was its next to last year as an important International event. Too dangerous, was the bleat coming from all sides. Sure, it was, but so what? I went there to stand up for it.

For me, that day remains one of the most magical I ever spent at motor racing.

Though we colloquially call this picture just "Collesano," its proper file ID is SC72Targa_Ferrari3CollesanoB

Add to Cart Add to Lightbox 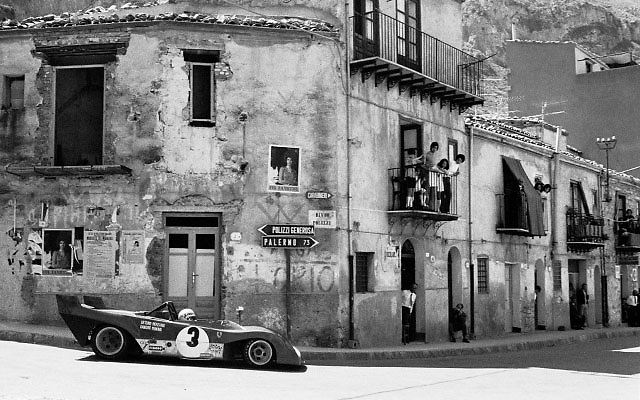